Zoophyte’s first tour on foreign shores was an absolutely incredible experience. Travelling to Noumea, New Caledonia as part of the Live en Août Festival, we were blessed with perfect weather, warm friendly people, great tasting beer called Number One and amazing support for the band across our five shows.

Whilst we had a gig every night, we also had the chance to see plenty of this beautiful country. We were introduced to so many wonderful people, but we’d like to give a special big shout out to the amazing Frederick and Julien who showed us around, looked after us and basically made sure we all had a bloody good time!

Some of the venues around town we played at included – Omao, Boop’s Café and Le Bout du Monde, but we would have to say the best gig we played hands down, was at Bodega Del Mar. Those guys just know how to get down! 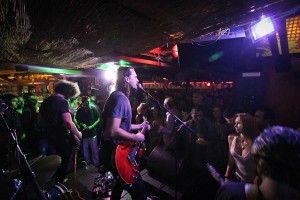 It is a little shack on a pier overlooking the ocean that packed in a few hundred people… it’s simply organised kaos in there. At various stages throughout the show the bar was set on fire, the crowd were randomly sprayed with water or blown over by these big air cylinders.

We played hard that night and the place was so jammed, that Gilpsy kept accidentally hitting people in the face with his bass guitar because they were standing too close… they somehow seemed to enjoy it though! The energy in the air was electric.

Driving on the right hand side of the road took a bit of practice for Gilpsy, who took it upon himself to take the role of driver. He almost came close to getting locked up in a New Caledonian prison for reckless driving, but eventually got the knack of it and managed to get us to each gig alive and safe – although not without some close shaves.

After 7 days, 5 shows and a showcase gig, it was time to say “au revoir” and we were a bit sad to say farewell to a lot of new friends and of course to all the beautiful beaches. A huge thanks to the organisers of the festival and of course the sponsors GBNC, for opportunity to play and also drink your great product Number One. Hopefully we’ll get back over there soon.

Til next time Noumea! Zoophyte. XO