Ever wanted to see you face on the cover of a Rock Album? Well now you can! Following the release of the bands sophomore album SOMEWHERE ELSEWHERE in late October, ZOOPHYTE proudly announce the release of their brand new iPhone App, ‘FACE IT’. 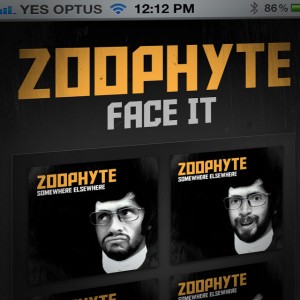 You can resize and rotate your own image or your mates, to create your own version of the Album artwork! Save it to your photo library or upload it to Facebook as your new profile pic. Check out the Apple App Store and DOWNLOAD it today.

The October release of SOMEWHERE ELSEWHERE, saw the bands album debut at Number 7 on the highly coveted AIR 100% Independent Albums Chart. In the lead-up to the release, the band kept fans entertained with a host of content through their website, which included an advance stream of the album resulting in hundreds of fans listening to tracks in lead up to the release. In addition, ZOOPHYTE provided an insight into studio shenanigans with a series of hugely successful snippets filmed during the making of the album SOMEWHERE ELSEWHERE.

The release of the band’s second single ‘EARLY MOURNING’, a guitar-heavy, alt-rock tour-de-force, has ZOOPHYTE again enjoying support from media nationally with the track receiving spins nationally from the Triple M network and a host of regional stations jumping on board.

Since kicking off in March with a killer live set, the band have shared stages with the likes of INXS, Eskimo Joe, Tex Perkins, Grinspoon and Jebediah, clocking up thousands of kilometres and playing over 50 shows around the country including a string of dates in Noumea, New Caledonia.

Mid-year the band inked a deal with Mushroom Music Publishing, which sees them join the ranks of an extraordinary roster of talent and the album SOMEWHERE ELSEWHERE distributed to TV’s Music Supervisors nationally.