Adding a rockier edge (The Courier)

Check out the following Zoophyte article published in the entertainment section of Ballarat’s The Courier yesterday. Written by Dellaram Vreeland. 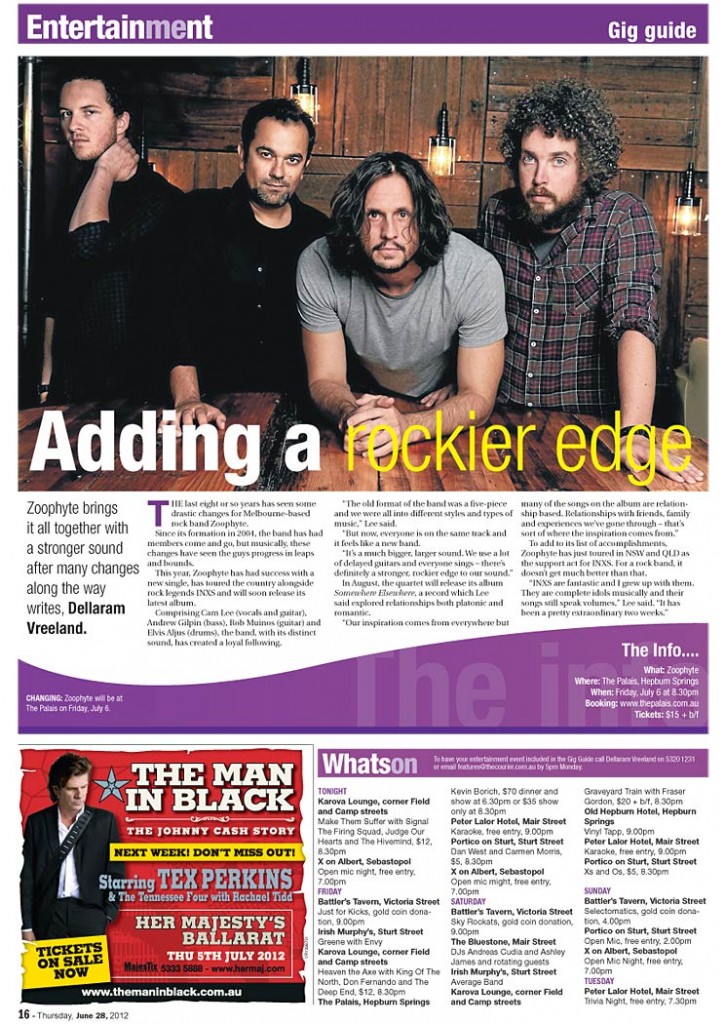 Zoophyte brings it all together with a stronger sound after many changes along the way writes, Dellaram Vreeland.

The last eight or so years has seen some drastic changes for Melbourne-based rock band Zoophyte. Since its formation in 2004, the band has had members come and go, but musically, these changes have seen the guys progress in leaps and bounds.

This year, Zoophyte has had success with a new single, has toured the country alongside rock legends INXS and will soon release its latest album.

“The old format of the band was a five-piece and we were all into different styles and types of music,” Lee said.

“But now, everyone is on the same track and it feels like a new band. It’s a much bigger, larger sound. We use a lot of delayed guitars and everyone sings – there’s definitely a stronger, rockier edge to our sound.”

In August, the quartet will release its album Somewhere Elsewhere, a record which Lee said explored relationships both platonic and romantic.

To add to its list of accomplishments, Zoophyte has just toured in NSW and QLD as the support act for INXS. For a rock band, it doesn’t get much better than that.

“INXS are fantastic and I grew up with them. They are complete idols musically and their songs still speak volumes,” Lee said. “It has been’a pretty extraordinary two weeks.”

Zoophyte will be at The Palais on Friday, July 6.

What: Zoophyte
Where: The Palais, Hepburn Springs
When: Friday, July 6 at 8.30pm
Booking: www.thepalais.com.au
Tickets: $15 + b/f